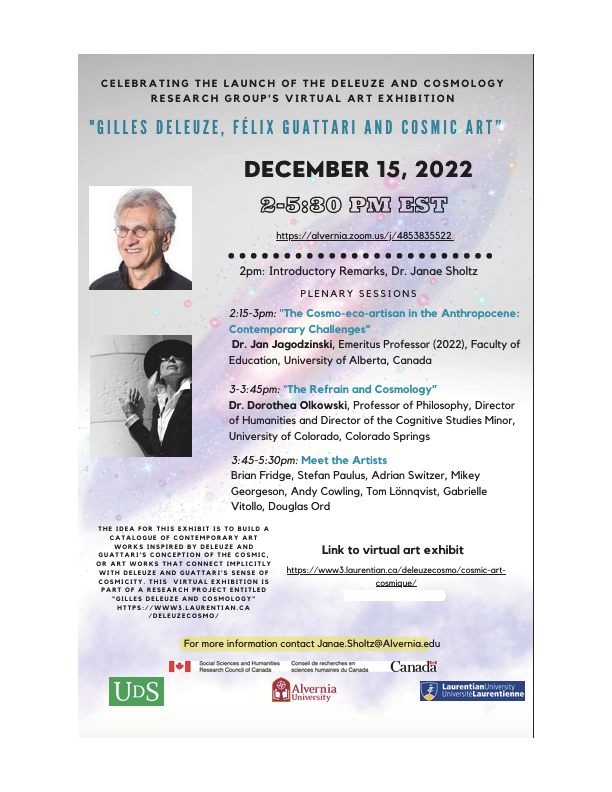 “If there is a modern age, it is, of course, the age of the cosmic.” (Deleuze and Guattari, A Thousand Plateaus)

Gilles Deleuze (1925-1995) and Félix Guattari (1930-1992) are among the few contemporary thinkers who incorporate cosmological questioning into their philosophy, thus renewing an old and partly lost way of seeing philosophy’s task. They redefine traditional transcendent cosmologies, which speculate on the laws of organization and ontological superiority of heavens, in favour of an immanent experience of the world and the universe, which makes of the geodynamic and “cosmic” Earth an object of philosophical investigation.

This redefinition is inspired by scientists (Mandelbrot, Prigogine, etc.), philosophers (Nietzsche, Whitehead, Bergson, etc.), and artists. Among the most prominent artists who announced the development of Deleuze and Guattari’s c(ha)osmological thinking are Paul Klee and Wassily Kandinsky’s cosmic pictural and theoretical themes, James Joyce and Witold Gombrowicz’s cosmic literary awareness, as well as Olivier Messiaen and Karlheinz Stockhausen’s cosmic music. The objective of this exhibition is to explore the multifaceted aspects of the “cosmic” in Deleuze and Guattari’s through the work of contemporary visual and musical artists. The exhibition reflects the new interpretations of contemporary art as grasped by artists through the concepts of Deleuze and Guattari’s c(ha)osmological theory. It shall provide consistency to the “cosmic” that Deleuze and Guattari consider characteristic for modern art.

The idea is to build a virtual catalogue of contemporary art works inspired by Deleuze and Guattari’s conception of the cosmic, or art works that connect implicitly with Deleuze and Guattari’s sense of cosmicity. This catalogue is meant to remain incomplete, just like the uni/multi-verse itself which is eternally in the midst of its own composition…

The cosmic within Deleuze and Guattari’s philosophical framework

In “Of the Refrain,” included in A Thousand Plateaus, Deleuze and Guattari make a didactic distinction between classical, romantic and modern arts. Modern art refers here to the works of 20th century artists, mainly although not exclusively, from the second half of the century. initiated, among others, by Klee in painting, Schönberg and Stockhausen in music, and Joyce in literature. In what sense do Deleuze and Guattari equate modern art and cosmic art? Why do previous artistic periods, say classicism and romanticism, are not primarily “cosmic”? And what does “cosmic art” mean exactly for Deleuze and Guattari?

To answer these questions, it is worth beginning with a quote taken from Paul Klee’s Notebook that is often revisited by Deleuze and Guattari : “Art does not reproduce the visible, rather it makes visible. […] The visible is only an isolated case taken from the universe. And thus there are more truths unseen than seen.” This idea from Klee is transposed by Deleuze and Guattari in the realm of philosophy when they write: “Modern philosophy tends to elaborate a material of thought in order to capture forces that are not thinkable in themselves.” (ATP, p. 343). Rendering artistically sensible forces that are not sensible by themselves (either visible or audible forces), capturing philosophically forces that are not thinkable by themselves. All this sounds seemingly absurd, esoteric, and even self-contradictory. We will try to give consistency to it.

The very basic idea behind grasping invisible forces is that there is more in reality than what our senses and thoughts can perceive and think. The artistic quest of a reality different than the ordinary one could be seen as a lieu commun in art. However, this quest has a very specific meaning for Deleuze and Guattari. More precisely, for them, there is a metaphysical level of reality that is floating right above, at the surface of natural things and connected to them. Deleuze and Guattari call this level of reality “molecular.” That is, abstract art, when it successfully grasps molecular forces still expresses nature despite the fact that the focus is on the invisible. The real paradox might lay there: modern art, for Deleuze and Guattari, expresses nature, it expresses the molecular aspect of nature. Not the physical nature, but a “cosmic” nature that is floating right above the physical reality and that has the potential of making of this physicality an event.

Grasping the world’s invisible or cosmic forces, for Deleuze and Guattari, is modern arts’ main task. And when they exemplify the forces expressed by modern artists, they invariably refer to natural forces, for instance the germination forces, thermic forces, magnetic forces, or the forces of eruption of life.

In the chapter “Of the Refrain,” Deleuze and Guattari distinguish and define classical art, romantic art and modern art as follow:

In classical art (e.g., Mozart, Michealangelo, and so on), the goal is to keep chaos outside. Classical composers, for instance, deterritorialise the refrain, but they reterritorialise music. In that sense, for Deleuze and Guattari, the task of the classical composer is godlike: organizing and dominating chaos, and doing so, (re)creating the World or bringing order out of chaos. Classical music comes out of (and distances itself from) chaos.

The modern artist is not an artist per se or a professional who would fix the matter (e.g., notes, colours, and so on) into a predetermined form (e.g., symphony, concerto, theme, and so on), but rather a cosmic artisan who is especiencing with materials and invisible cosmic forces. Organized forms leave place to chaosmic forces.

Although music is central in “Of the Refrain,” a similar experimental play of materials and forces occurs in other modern artistic forms of expression. Artists never ceased to express nature, the world and the universe, but the perspective on nature, the world and the universe changed in the modern age. The modern artists Deleuze and Guattari find inspiring explore the invisible cosmic forces that animate, constitute, affect and are affected in return by the world. Not only are these forces not sensible, but they are also abstract. Or they are abstract because they are not perceivable by the senses, not properly thinkable by the philosopher. Artists and philosophers can only see the effects of these forces in matter, and then are they realizing that matter could not exist without them. This is why, for Deleuze and Guattari, modern art goes abstract.

Certainly, Deleuze and Guattari’s own esthetical tastes are involved in this conception of modern “cosmic” art, which applies more easily to some contemporary modern artists than others. Unquestionably, many contemporary artists would resist this conception of modern art for being too metaphysical or even too tendentious. Undeniably, as well, there are many reasons to explain why contemporary art turns to abstractions. Deleuze and Guattari provide a cosmic explanation that, we think, can be fruitful.

Two general thesis about art can be found in Deleuze and Guattari writings. One of them, presented in What is Philosophy?, associates art to the creation of “blocs of sensations.” This thesis was commented on at considerable length in the secondary literature. The other general thesis on art generated a much more limited number of commentaries. As a matter of fact, it almost passed under the radar. According to this thesis, which is briefly contextualized above, modern art has a “cosmic” dimension. The cosmicity of modern art, discussed in the chapter “Of the Refrain” in A Thousand Plateaus, is precisely what this virtual exhibition intends to explore. This thesis appears like a hapax within the work of Deleuze and Guattari and it seems relevant to confront this thesis with the modern artistic productions themselves.